Ours is a historic farm, yes, with one of those amazing historic farm houses, but also the heavy weight of pain that is early American land “settlement” and the South since the 1800s. We discover arrowheads and civil war bullets in the fields. And just as eagerly, from our neighbors we are trying to discover the living memories that surround this house and this land. Since the 1810s, we are only the fourth family to farm this property.

The original farm was part of land grant from Virginia (when Kentucky wasn’t yet Kentucky) to the infant son of Col. Richard Callaway, a surveying partner to Daniel Boone, and spanned nearly a thousand acres in the Henry County area. The original country house was completed in the 1790s (occupied by our delightful, historically-minded neighbor), while our house was completed in the early 1810s, as we understand, as a gift to a daughter. Our understanding is that there are only three remaining Callaway houses.

The property was in the Callaway family until the early 1900s when the Willson’s took over, a farming couple who raised, by local accounts, a rowdy, hard-working bunch of brothers. In a way, the Willson’s were themselves pioneers like the Callaway’s. Their claim to fame was in being some of the first to raise hogs indoors in a full closed-loop system. The brothers divided the work of raising corn, grains, cattle and hogs on adjoining acreage with our property being the hub for the hogs, feed storage and tractor fixing. Shortly after the Smithfield grain mill closed, the Wilson brothers built a state-of-the-art barn (for the 50s) that acted as their granary, where they cleaned, ground, and mixed feed. 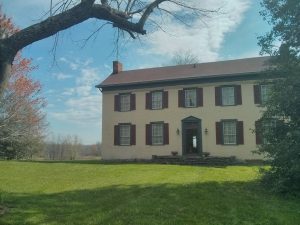 After the Willson’s, the McCouns farmed this area from the 80s until just before us. As the previous owner aged out of farming, and the farm-children pursued off-farm jobs, part of the land, the flatter five acres, was leased to a neighbor for tobacco. While Mr. McCoun kept about 27 acres, the remaining 200+ were sold and are now leased to a corn and soybean operation. 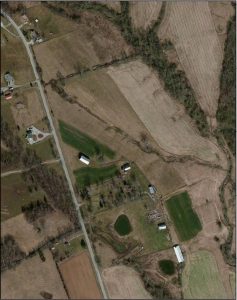 And this is what we inherited: five acres of cultivated land, two ponds, about 20 acres of rolling pasture, three charming barns now dated and in need of repair, a few springs threatening to go dry, and multiple unconnected sections of fence. We inherited a long history and good soil that has been neglected. This land has imposed on us a responsibility, not only to its history, but also its fertility, and as we go about our daily work of milking the cows, feeding the chickens, tending the gardens, or trying to chase off the muskrats, we are trying to respond to the needs of this place. Our goal is to leave this soil richer than we found it; it is to understand this history and to reconcile it when and where we can. In short, it is to care for this piece of land.